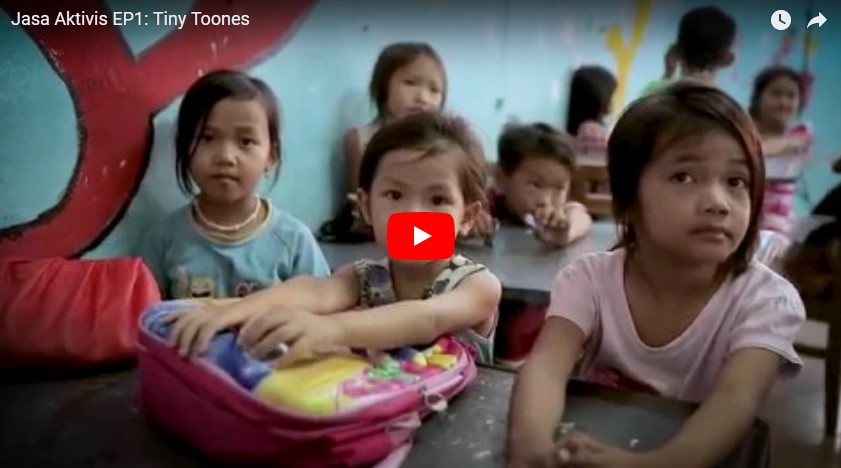 This is the moment we’ve been waiting for, the chance to share a fascinating in-depth documentary with you. Producer Loh Kok Hong and presenter Fadli Kamsani came to Phnom Penh, and spent a lot of time getting to know Tiny Toones. The result is this amazing piece of work we feel really captures what we are all about.

The documentary was recently fetured on Singapore TV, but we’re now releasing it in Cambodia for the first time. It features amazing dancing, behind the scenes footage, and lengthy interviews with founder KK and teacher/ dancer Slick. It’s got a lot of heart and a lot of energy, which is also the magic formula behind Tiny Toones.

You’ll see what fun the kids have at Tiny Toones, but also how happy they are to get a chance at an education, and just how profoundly that can turn their lives around. You’ll see Slick’s journey from despair to hope, but you should know that hundreds of our kids take that same journey.

We do need your support to make this happen. Every year funding is a battle for us, and 2018 is shaping up to be the same. Remember, just $10 will pay one of our teachers for a day, while $30 will pay for a child’s entire education for a month, in dance and more traditional subjects. Where else can you get value like that? If you can afford to donate, please go here – we’d be really grateful.

If you simply can’t afford to give right now, we totally understand, but do go to our Facebook and follow us so you can keep hearing our stories. In the meantime, hit play and enjoy the show.

“Meeting the students of Tiny Toones convinced me that all the hardships only make these young people better, stronger and kinder in life. Almost everyone has a compelling story to share, almost every one of them was worthy of a documentary. And the talents in these young people were just mind-blowing – our crew had a blast just filming all of them breakdancing.” Loh Kok Hong, TV producer and director.

One of the best things about being an NGO working in the creative arts is that it brings us together with other creative people from across the world. Loh Kok Hong is one of those people, responsible for a fantastic half hour documentary which recently aired on Singaporean TV, and which we’ll be showing in full on our website very soon. We’re not a big wealthy NGO able to pay for marketing or fundraising staff, so having friends like Kok Hong is crucial to helping us get the word out and raise money we urgently need.

The documentary was the first in a series about social activists around Asia. Loh Kok Hong and his presenter Fadli Kamsani came to Phnom Penh, spoke to KK about how Tiny Toones was born, and showed B Boy Slick’s extraordinary journey from homelessness and drug addiction to a career as an international performer and teacher. We spoke to Loh Kok Hong about why he filmed Tiny Toones.

“When we conceptualised the social documentary series we wanted to profile inspiring individuals using creative solutions to tackle social issues in Asia. KK and Tiny Toones easily came to mind because of the use of hip hop and breakdancing for the street children. KK was very well known in the international media so he’s always been on our radar.”

Nor did meeting the Tiny Toones crew in the flesh disappoint him. “I found KK and the young people of Tiny Toones highly inspiring. The talents, and the character strengths in these young people are compelling – they didn’t go through hardships for nothing. They are now looking at a brighter future ahead because of the confidence and strengths that they gained through the years of perfecting their breakdancing.”

Loh Kok Hong hopes that people will be inspired by watching the show. “Our series finished airing on Singapore TV Channel in January. Whoever watched it, including the channel heads, my bosses, my colleagues and my own family, have responded very well to the story. Our mission has been achieved – we succeeded in sharing with the viewers and our friends that these Cambodians are truly amazing people, and now I only hope to come back to film more!”

Thank you Loh Kok Hong, you will always be very welcome at Tiny Toones.

Please check our Facebook over the next week, when we’ll be airing some excerpts before featuring the full documentary on our website. If you wish to support our work with a donation or learn more go here.