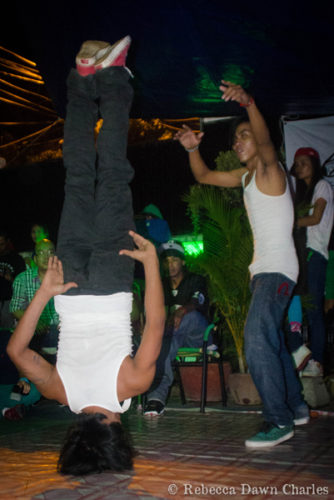 Battle of the Breakers!

If you’ve been following our Facebook posts over the past 2 months, you’ve probably seen posts about Tiny Toones staff dance battles!

When we started our fundraising drive in September, we also decided that for every $1000 we raised in donations on our Global Giving page, we would organize and film a 3 round dance battle between some of the best breakdancers at Tiny Toones!

So far we have had 2 rounds, Round 1 (Suicide vs. Kha) and Round 2 (Homie vs. Fresh). It was decided, via comments on our Facebook page, that Suicide won round 1 and Fresh won round 2. This means that when we hit $3000 in donations we will film a runner up battle (Kha vs. Homie) and then when we reach $4000 we’ll host the grand final to decide who is the best dancer at Tiny Toones! If you’d like to see more check out the facebook page and feel free to send us a donation at the link above.