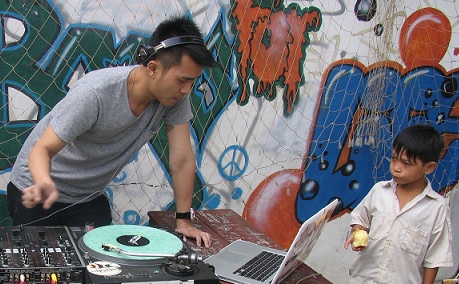 In early 2013, Tiny Toones was fortunate enough to be visited by the internationally acclaimed DJ Koflow. Hailing from Singapore, Koflow’s won a number of awards including first runner up at the Singapore DMC Champion 2003, Juice Magazine Best New DJ 2003, Best Musician at the Nike StreetStyle Awards in 2004, Honorable Mention for Juice Magazine Best Independent DJ 2004 and first place at the Heineken Thirst Singapore 2005.

He put on a sensational performace in the courtyard of the Tiny Toones centre. Afterwards, he pulled aside some of the music teachers to show them some tricks of the trade and inspire them with his talent.