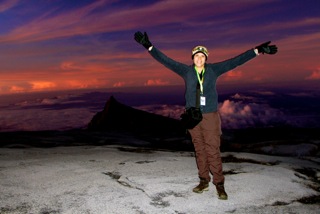 From Battle Break and Bake to Kinabalu Summit

On April 3rd, I started my climb to scale the dizzy heights of Mount Kinabalu in Borneo. Armed with my backpack, lots of water, my Guide Arnold and positive spirits I began my ascent at 9.15am.

It took six hours to get to the half way point, Laban Rata, where we spent the next few hours trying to get as much sleep as possible before the rising at 1.30am the following morning to make the arduous climb to the summit of the mountain. I arrived at Laban Rata in great spirits, excited for some tasty sustenance and a good night’s rest. The views were spectacular and the breeze was a welcome relief from the exhausting climb.

Waking up at 1.30am was not easy, especially after only 6 hours sleep but I was excited to get to the summit. So armed with a small breakfast, my head torch and my camera, we started on the 2.6km hike up to the summit. The scariest part for me was using the ropes to climb up some sheer rock faces with just the light of the head torch to guide me! Luckily my guide was encouraging and helpful and eventually, we made it to the summit just as the sun was rising. The sight was spectacular, and the climb had been worth it!

As a Drama teacher and an educator myself, nothing inspires me more than people who give up their time, commitment and passion to help build a more confident, supported youth of tomorrow, particularly for those who may not otherwise lead such a promising future.

When I first thought of this crazy idea, I decided that to justify this sheer (excuse the pun) craziness, I would raise money for ‘Tiny Toones’, a Global Concern I currently support through my school, along with a bunch of awesome Middle schoolers!

Do you have a crazy idea on how to fundraise for Tiny Toones? Shoot us an email, we want to hear it!